Fig: Major regions of a gene

Promoters regulate level of gene expression by specifying how many mRNAs are produced i.e transcribed for a given gene. The DNA sequence of the promoter region interacts with transcription factor proteins that serve to recruit the cellular machinery needed to produce the RNA transcripts. Transcription is performed by the enzyme, RNA polymerase. The resultant RNA transcript is processed into mRNA, and then translated into protein. The number of mRNAs produced is a primary factor determining the amount of protein synthesized, which plays a role in determining the level of gene expression.Factors that bind to promoters react to signals from the organism or/and the surrounding environment. The source and type of signal determines the type of promoters that are activated. In genetic engineering, there are three major types of promoters used, depending on the level of gene expression and specificity required:

2.Tissue-specific or development-stage-specific promoters: These promoters facilitate expression of a gene in specific tissues or at certain stages of development while leaving the rest of the organism unmodified. In the case of plants, such promoters might specifically influence expression of genes in the roots, fruits, or seeds, or during the vegetative, flowering, or seed-setting stage. If the developer wants a gene of interest to be expressed in more than one tissue type for example the root, anthers and egg sac, then multiple tissue-specific promoters may have to be included in the gene construct.Effective gene expression in specific plant parts or development stages often has been observed when promoters from closely related species are used. There are many promoters in this category because they have different tissue and developmental specificities. An example of a tissue-specific promoter is the Phosphoenolpyruvate (PEP) carboxylase promoter which induces gene expression only in cells that are actively involved in photosynthesis.

3. Inducible promoters :These promoters are activated by exogenous (i.e., external) factors. Exogenous factors may be abiotic such as heat, water, salinity, chemical, or biotic like pathogen or insect attack. Promoters that react to abiotic factors are the most commonly used in plant genetic engineering because these can easily be manipulated. Such promoters respond to chemical compounds such as antibiotics, herbicides or changes in temperature or light. Inducible promoters can also be tissue or development stage specific.

4. Synthetic promoters : These promoters are DNA sequences that do not exist in nature and which are designed to regulate the activity of genes, controlling a gene’s ability to produce its own uniquely encoded protein.

1.Screening of the genomic DNA library constructed from the mutant plant

1. Screening of the genomic DNA library constructed from the mutant plant : T- DNA and transposable elements are used in the creation of mutant plants then DNA fragments flanking the T-DNA are identified from the library and used as a probe to isolate the wild type genomic sequence.The T-DNA disrupts the expression of the gene also it acts as a marker for subsequent identification of the mutation. In this method, large populations of tagged mutants are generated, which can then be screened for insertions in specific genes .Alternatively, the insertion tags can be individually sequenced and compiled in databases that can be searched for a gene disruption event of interest .This is becoming easier now as genomic sequences of many insertion sites are becoming available

2. Plasmid rescue: Widely used method for obtaining sequence information about the T-DNA–gDNA junctions in the recipient genome .It is an approach which is employed in case the T-DNA construct consists of an antibiotic resistance gene and a bacterial origin of replication (ori) . The genomic DNA of mutant plant is subjected to complete digestion followed by ligation to circularize all the fragments and transform them into E. coli host. The plasmids isolated from the E. coli would be analyzed for the presence of T- DNA and the flanking plant DNA sequences 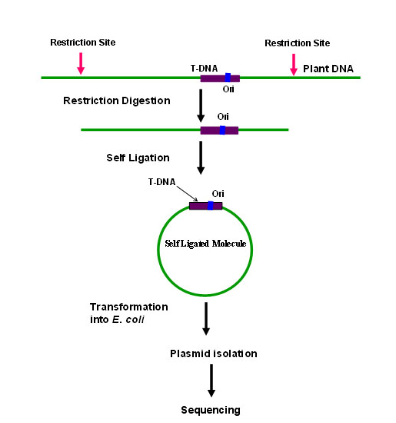 3. Inverse PCR (IPCR): It amplify the unknown sequence from the known sequence. Cleavage of genomic DNA by a suitable enzyme followed by ligation of the fragments to facilitate self-circularization. A set of nested primers derived from the T-DNA border regions are used to amplify the flanking DNA, cloned and sequenced and is specially useful in the amplifying and identifying flanking sequence of various genomic inserts 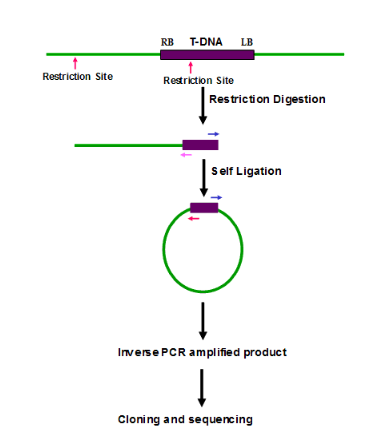 4. Genome Walking : Genome walking is a method to isolate flanking genomic segments (e.g. promoter regions) adjacent to a known sequence. Uncloned genomic DNA is digested with various restriction endonucleases.Ligated to long suppression adapters The desired genomic region is amplified with a primer specific to the outer part of the suppression adapter and a gene-specific primer . Since the adapters are long and the adapter-specific primer is short (the sufficient ratio is 40 to 20 base pairs) .The amplification of the whole pool from that single adapter-specific primer is effectively suppressed, and only the fragments of interest are generated during PCR. Both flanks of the known sequence – downstream as well as upstream – can be amplified, the direction depends exclusively upon the strand specificity of the gene-specific primer. 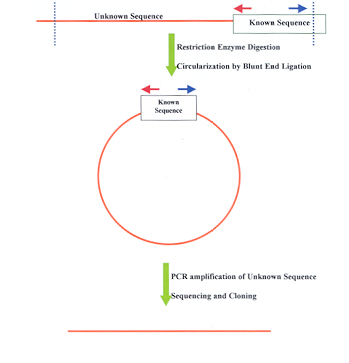 5.Thermal Asymmetric Interlaced PCR (TAIL-PCR) : Makes use of three nested T-DNA-specific primers in one end and a short arbitrary degenerate (AD) primer in the other end .Three different PCR reactions are performed with these primer sets. The primary PCR reaction involves different primer annealing temperatures and low and high stringent cycles to facilitate annealing of arbitrary and specific primers, respectively .This step results into both specific as well as nonspecific amplification of products.In the next two steps of PCR reactions the non-specific products are eliminated amplifying predominantly the T-DNA flanking genomic DNA 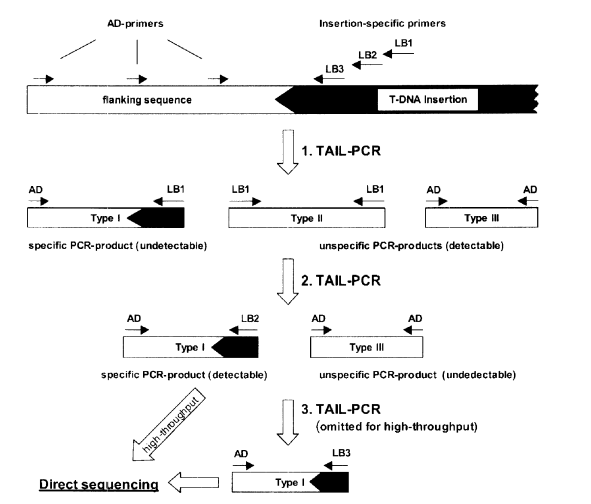 What are regulatory elements

Molecular networks use a broad variety of regulatory elements

Identifying enhancers and enhancer regulatory elements: is an active area of research and most often focuses on the mapping of putative enhancers through the integrating of information on post-translational histone modifications, DNA sequence, genomic localization, and nearby gene expression. Definitively identifying enhancers requires experimental evidence documenting the effect of increased gene expression, and most studies focus on putative enhancers. As evidenced by the small number enhancers that have definitive regulatory functions, identifying and characterizing enhancers has proven difficult. Multiple enhancers can act additively and redundantly to regulate gene expression .In addition, enhancers may act independently of their sequence context and at distances of several to many hundreds of kb from their target genes through a process known as looping . As a consequence of these features, it is difficult to identify putative enhancers and link them to their target genes on the basis of DNA sequence alone. Current strategies focus on identifying putative enhancers using computational and experimental approaches, and the critical integration of these disciplines, as discussed below.Clusters of enhancers that are occupied by “master regulator” TFs have been termed super-enhancers , however both the terminology and function of super-enhancers has been debated .Other types of distal regulatory elements include insulators, often bound by the protein CTCF.

Understanding the regulation of transcription by sequence-specific regulatory  factors  and subsequent  remodeling  of  chromatin  is  central to studies of health and disease. The activities of regulatory factors at promoters, enhancers, silencers and insulators typically cause  nucleosomes  to be  evicted from chromatin in eukaryotic cells1. Therefore, one of the  most effective means of  discovering transcriptional regulatory elements is through the identification of nucleosome-depleted regions (‘open chromatin’). Historically, this was accomplished  by exploiting regional hypersensitivity to  nucleases such as DNase .More recently, we demonstrated an alternative  methodology  for  the detection  of  open  chromatin, which  we  termed  FAIRE(Formaldehyde Assisted isolation of regulatory elements ). FAIRE  was  first  characterized  in yeast and subsequently applied  to human cells and tissues The technique has proven useful for a wide range of eukaryotes, from Plasmodium to  maize.  Here we present  recent method-ological  enhancements that  improve  the  utility  and  reliability of  FAIRE, especially  for  use on  tissues or  lipid-laden cells  such  as adipocytes

Antibody  and enzyme  independency: In contrast to ChIP, which is highly subject to antibody reliability and variability issues24, FAIRE offers the consistency of a chemical- based  isolation.  Moreover,  FAIRE  does not  require  enzymes,  such  as  DNase  or MNase, which are commonly used in ana-logous methods for detecting nucleosome-free  regions.  Avoiding  the  optimization and  extra  steps  necessary  for  enzymatic processing  or  immunoprecipitations  eliminates a major source of variation, and thus makes it a much more reliable  and robust method.

Enhancer detection.: As described here and in Song  et  al., FAIRE may identify addi-tional transcriptional enhancers and other distal regulatory elements in comparison to other methods such as DNase-seq.

Sequenced  input  control  not  required :As discussed in Rashid et al., a sequenced input control is generally not required for proper analysis of FAIRE-enriched regions. This  reduces  next-generation sequencing costs as well as the cost of reagents.

Applicability to tissue samples : As FAIRE does not require a single-cell suspension or nuclear isolation, it is easily adapted for use on tissue samples. The only additional step needed is pulverization of frozen tissue into a coarse powder before fixation